First we of all to display the results on a lightbox,we to have a black overlay for this we need a div element and inside it we need a closing button.

Clicking on the black overlay should toggle status of light box therefore we have binded click event with showMore() method.

Therefore I have implemented a div element and put all the chart elements inside the div element so that it will be displayed on a white foreground on a translucent black background.

The code to display All providers and All authors are contained inside the   white block and the logic to display the each section is also implemented.

Currently we are displaying the top five providers and authors and we provide a button to show more providers and authors which then displays 50 more results and then we display an interactive button that toggles display of all authors and providers on a lightbox. To display 5 and 50 results we use slice pipe in angular. The button Show All Providers/Authors is binded with showMore() function which toggles lightbox.

It is really important for a Progressive Web Application like Loklak to be user friendly. To enhance the user experience and help user scroll up through the long list of results, a new ‘Scroll to Top’ feature has been added to Loklak.

The feature is built using HostListener and Inject property of Angular, which allows to use Window and Document functionalities similar to Javascript.

First step would be to import HostListener and Inject, and create property of document using with Inject.

Next step would be to create method to detect the current state of window, and scroll to the top of window.

The last step would be to add user interface part i.e. HTML and CSS component for the Scroll to Top feature.

HTML portion contains a div tag with class set to CSS created and a button with click event attached to it to call the scrollToTop() method created above.

The CSS class corresponding to the div tag provides the layout of the button.

The button style creates a round button with an interactive css properties. scroll-to-top class defines the behaviour of the div tag when user scrolls on the results page.

Goto Loklak and search a query. On results page, scroll down the window to see upward arrow contained in a red circle like:

On clicking the button, user should be moved to the top of results page.

CSS Grid is the latest web standard for the layouts in the web applications. This is the web standard which allows the HTML page to be viewed as 2-dimensional for laying out the elements in the page. It is thus used in parts of loklak search for layout. In this blog post, I will discuss the basic naming convention for CSS grid and its usage in Loklak Search for layout structuring and responsiveness.

The grid container is the container which is the wrapper of all the grid items. It is declared by display: grid, this makes all the direct children of that element to become grid items.

We define rows and columns of the grid as the lines, the area between any two lines is called a grid track. Tracks can be defined using any length unit. Grid also introduces an additional length unit to help us create flexible grid tracks. The new fr unit represents a fraction of the available space in the grid container.

The area between any two horizontal and vertical lines is called a grid cell.

The area formed by the combination of two or more cells is called a grid area.

The CSS grid is used in loklak search uses CSS grid in the feeds page to align elements in a responsive way on mobile and desktop. Earlier there was the issue that on small displays the info box of the results appeared after the feed results, and we needed to make sure that it appears on top on smaller displays. This is the outline of the structure of the feed page.

Now we use the CSS grid to position the items according to the display width. First we declare the “feed-wrapper” as display:grid to make it a Grid Container, and we associate the rows and columns accordingly.

Now we define the grid areas i.e. the names of the areas using the grid-area:<area> css property. This gives names to the elements in the CSS grid.

The last thing which remains now is to specify the position of these grid elements in the grid cells according to the display width, we use simple media queries along with simple grid area positioning property, i.e. grid-template-areas.

This positions both the boxes according to the display width, in one column for large displays, and info box on top of results on mobile displays.

This is how it looks on the large desktop displays

This is how it looks on small mobile displays

Loklak media wall needs to provide an appealing view to the user. The issue of visibility of scrollbars appeared on the browsers which uses webkit as a browser engine, for example, Google chrome and some others. This issue caused problems like shifting of elements when scrollbars are visible, bad UI. The task was to hide the scrollbars completely from the application while still making overflow of web page resources available by scrolling.

In this blog, I explain how to hide scrollbars from a webpage and still making scrolling available for the user.

The wrapper division needs to be a block which should occupy total web page available and CSS property overflow should be set to auto.

Continue ReadingHiding the Scrollbar in HTML in the loklak Media Wall

In Susper, the Information and Analytics boxes disappeared for widths smaller than 1100px, since they were too big to fit in the existing page layout.
In Laptop view:

The following is the html code for the Infobox:

We can make the following observations:

The typescript code is as follows:

This code thus effectively toggles between the messages Show and Hide, if the button is clicked when the message says Show, it changes to Hide and vice-versa

The css code ensures that this combo-box is displayed only for widths less than 768px (only mobile and tablet screens).

In Susper, we were facing a unique problem for Information box and Analytics box alignment.
At a width of around 1290 px, the boxes fit perfectly in Firefox as shown:

However, they were slipping to the next line in Google Chrome browsers for the same dimension(1290 px)

The solution to this issue was to write browser-specific CSS.
The two most commonly used browser specific tags are

For our problem, we need to use @media screen and (-webkit-min-device-pixel-ratio:0) { }
This was how the code was written for both the components (Information box and Analytics box). Please refer to infobox.component.css and statsbox.component.css for the entire code.

As a result of this snippet of code, we see the following effects:

This is how the display finally looks in Chrome:

In  Susper, the drop-down menu is customized with colorful search icons and we wanted to maintain the same menu for mobile screens too, however the drop-down menu disappeared for all screens with width less than 767px. This blog can be used to learn how to create css classes for such drop-down menus without using any bootstrap.
This is how the issue was solved.

Using col-sm-4 will do the following

Since the drop-down menu’s design was to remain intact, I made the following changes:

Now I wrote personalized css for these classes.

In the Facebook Developer Conference, the logo was too small

In the Open Tech Summit Event, the logo was too long and increased the height of the navigation bar

We decide some constraints regarding the width and the height of the logo. We don’t want the width of the logo to exceed greater than 110 pixels in order to not let it become too wide. It would look odd on small and medium screen if barely passable on bigger screens. We also don’t want the logo to become too long so we set a max-height of 45 pixels on the logo. So, we apply a class on the logo element with these properties

But simply using these properties doesn’t work properly in some cases as shown in the above screenshots. An alternative approach is to resize the logo appropriately during the generation process itself. There are many different ways in which we can resize the logo. One of them was to scale the logo to a fixed dimension during the generation process. The disadvantage of that approach was that the event logo comes in different size and shapes. So resizing them to a fixed size will change its aspect ratio and it will appear stretched and pixelated. So, that approach is not feasible. We need to think of something different.  After a lot of thinking, we came up with an algorithm for the problem. We know the height of the logo would not be greater than 45px. We calculate the appropriate width and height of the logo, resize the image, and calculate dynamic padding which we add to the anchor element (inside which the image is located) if the height of the image comes out to be less than 45px. This is all done during the generation of the app. Note that the default padding is 5px and we add the extra pixels on top of it. This way, the logo doesn’t appear out of place or pixelated or extra wide and long. The detailed steps are mentioned below

Here is an excerpt of the code. The whole work and discussion can be viewed here

It solved the problem. Now the logos of all the events were displaying properly. They were neither too wide, long or short. Here are some screenshots to show the improvements. 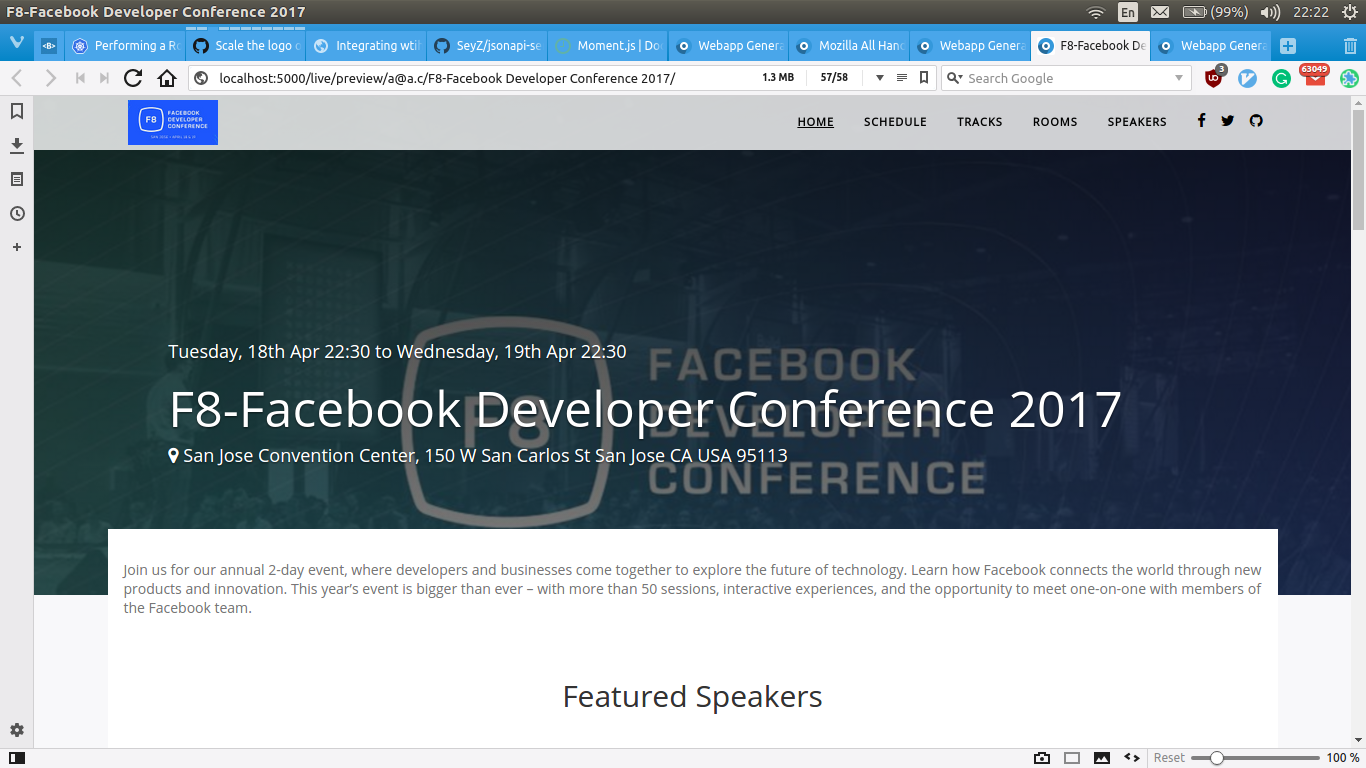 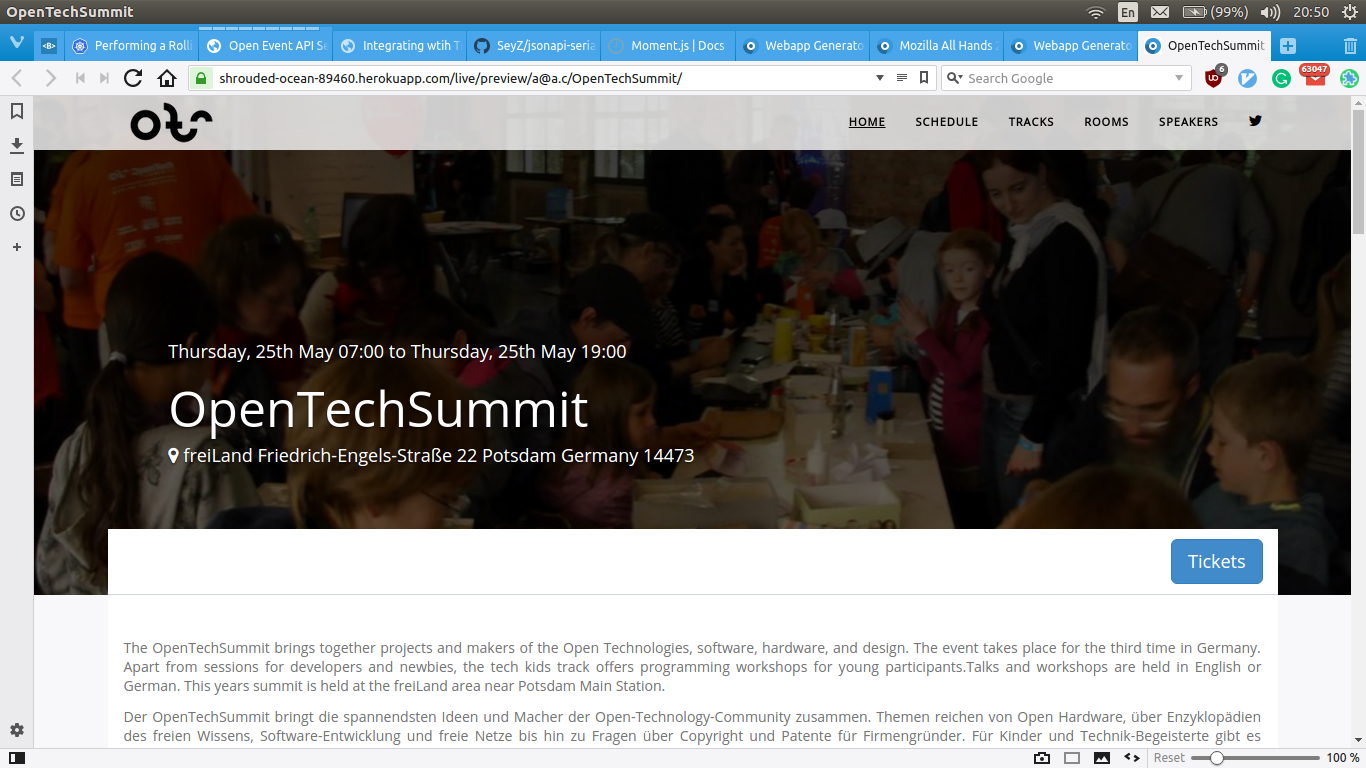 Susper used to take long time to load the initial page. So, there was a discussion on how to decrease the initial loading time of Susper.

Later on going through issues raised in official Angular repository regarding the time takento load angular applications, we found some of the solutions. Those include:

After these changes we found the following changes in Susper:

Also we could see that all files are now initiated by service worker:

While deploying our application, we have added –prod and –aot as extra attributes to ng build .This enables angular to use production mode and ahead of time compilation.

For service workers we have to install @angular/service-worker module. One can install it by using:

The whole implementation of this is available at this pull: