With the development of the API server for the Open Event project we needed to decide which framework to choose for the new Open Event front-end. With the plethora of javascript frameworks available, it got really difficult to decide, which one is actually the right choice. Every month a new framework arrives, and the existing ones keep actively updating themselves often. We decided to go with Ember.js. This article covers the emberJS framework and highlights its advantages over others and  demonstrates its usefulness.

Why is Ember JS great?

Convention over configuration – It does all the heavy lifting.

Ember JS mandates best practices, enforces naming conventions and generates the boilerplate code for the various components and routes itself. This has advantages other than uniformity. It is easier for other developers to join the project and start working right away, instead of spending hours on existing codebase to understand it, as the core structure of all ember apps is similar. To get an ember app started with the basic route, user doesn’t has to do much, ember does all the heavy lifting.

After installing this is all it takes to create your app.

Similar to Ruby on Rails, ember has a powerful CLI. It can be used to generate boiler plate codes for components, routes, tests and much more. Testing is possible via the CLI as well.

These are some of the examples which show how easy it is to manage the code via the ember CLI.

Ember JS makes it incredibly easy to use test-first approach. Integration tests, acceptance tests, and unit tests are in built into the framework. And can be generated from the CLI itself, the documentation on them is well written and it’s really easy to customise them.

This is all it takes to set up the entire boiler plate for the test, which you can customise

Ember JS has one of the best possible documentations available for a framework. The guides are a breeze to follow. It is highly recommended that, if starting out on ember, make the demo app from the official ember Guides. That should be enough to get familiar with ember.

Ember Guides is all you need to get started.

It sports one of the best implemented API data fetching capabilities. Fetching and using data in your app is a breeze. Ember comes with an inbuilt data management library Ember Data.

To generate a data model via ember CLI , all you have to do is

Where is it being used?

Ember has a huge community and is being used all around. This article focuses on it’s salient features via the example of Open Event Orga Server project of FOSSASIA. The organizer server is primarily based on FLASK with jinja2 being used for rendering templates. At the small scale, it was efficient to have both the front end and backend of the server together, but as it grew larger in size with more refined features it became tough to keep track of all the minor edits and customizations of the front end and the code started to become complex in nature. And that gave birth to the new project Open Event Front End which is based on ember JS which will be covered in the next week.

With the orga server being converted into a fully functional API, the back end and the front end will be decoupled thereby making the code much cleaner and easy to understand for the other developers that may wish to contribute in the future. Also, since the new front end is being designed with ember JS, it’s UI will have a lot of enhanced features and enforcing uniformity across the design would be much easier with the help of components in ember. For instance, instead of making multiple copies of the same code, components are used to avoid repetition and ensure uniformity (change in one place will reflect everywhere)

This is a perfect example of the power of components in ember, this is a component for event information display in a card format which in addition to being rendered differently for various screen sizes can act differently based on passed parameters, thereby reducing the redundancy of writing separate components for the same.

Ember is a step forward towards the future of the web. With the help of Babel.js it is possible to write ES6/2015 syntax and not worry about it’s compatibility with the browsers. It will take care of it.

This is perfectly valid and will be compatible with majority of the supported browsers.

Some references used for the blog article:

This page/product/etc is unaffiliated with the Ember project. Ember is a trademark of Tilde Inc

I would request you to please guide me as to how can I collaborate with you and also how can I contribute effectively to the organization.

At times I might get up to 20 private mails per day about “How to contribute to Open Source”. Usually I will direct developers to our mailing list or chat channels if they are asking about a specific project. But, how do contributions work at FOSSASIA? How can new developers join projects effectively? We have tried many different ways and spent a lot of time communicating with newcomers, many of them new to Git and Open Source development.

Over the years we have gotten better at helping new developers, designers and other contributors to join up. We have more than 1300 registered developers in our GitHub organization today. Not all of them can contribute every day, but we do have thousands of commits every year.

So, how are we able to scale up? I believe one reason are our Best Practices. We didn’t have a document “FOSSASIA Best Practices” yet, but in our daily work we have established excellent (mostly unwritten) best practices, that I would like to share in a concise form here now as a reference for new developers.

Happy to get your feedback and comments.

Every project at FOSSASIA has its own channels. Many projects use Gitter, some Slack or IRC. Usually you will find information of the main communication channels of a project in the Readme.md.

While we are a community of Open Source and Free Software developers we still reserve our right to use whatever tools we deem necessary to help us to achieve our goal of developing the best possible Open Technologies – software and hardware. It is one step at a time 🙂

Chat is a great way to connect with other contributors, but not all contributors are there all the time (consider time difference and personal schedules) and they are not always available to chat. Chat tends to be unstructured and with lots of people in a room there are often a number of threads. Therefore chat is great for help on setup issues and things where you got stuck.

Do not use chat for feature requests and detailed discussions on issues. These things are best for the issue tracker, where people from different timezones can join and where a focused conversation on one specific topic can happen.

Some people try to overcome the unstructured chats by switching to private communication. This shuts out other contributors who might have similar issues. A result I often observed is also, that contributors will bring up arguments in discussions like “I have discussed this already with xyz privately and he agrees”. Other contributors have not seen this discussion if it has not been taken place in public and we haven’t seen the arguments. We don’t know if xyz really agrees or if it was misunderstood. Private conversations are not transparent. Surely, there are cases where private chat is needed, e.g. for specific deployment questions of projects, but whenever you talk about development, please switch to public chat or open an issue.

Scope of Issues and Commits

Most FOSSASIA Projects have:

Thank you for helping to define many of the practices while working on the Open Event project to the developer team and for additional input and links to Niranjan Rajendran.

Links to Other Resources

We often get the question, how can I join the community. There is no official membership form to fill out in order to participate in the Open Tech Community. You simply start to contribute to our projects on GitHub and you are already a member. So, let’s work together to develop to develop social software for everyone!

The FOSSASIA team welcomes contributors and supporters to Free and Open Source Software. Become a developer, a documentation writer, packaging maintainer, tester, user supporter, blogger or organize events and meetups about our projects. 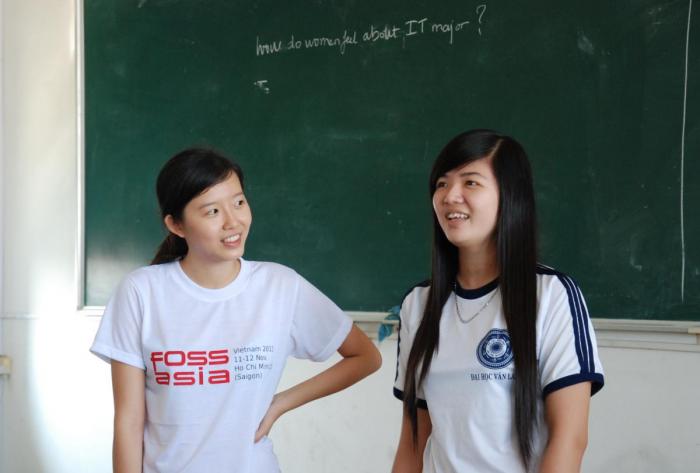 Women in IT discussion in the community

Here are some ideas how we can collaborate

Download our Open Source applications, install them and use them

The first step of joining a project is always to download the software and try it out. The best motivation to support a project is, if the project is useful for yourself. Check out our many projects on github.com/fossasia and our project social media Open Source search engine on github.com/loklak.

Help to motivate existing contributors and show your support of FOSSASIA projects on GitHub. Star projects and fork them. Doing something that people like and that helps people is a great motivation for many.

We have formulated best practices for contributing to Open Source to help new contributors to get started. Please read them carefully. Understanding our best practices will help you to collaborate with the community and ensure your code gets merged more quickly.

Subscribe to the FOSSASIA Newsletter to stay up to date on new software releases, events and coding programs here on the main page.

Learn from Open Tech articles on our blog that are written by developers, contributors, volunteers, and staff of companies supporting the FOSSASIA network. Sign up for the FOSSASIA Mailing List and keep reading our blog at blog.fossasia.org.

Show us you interest in FOSSASIA’s Open Technology and keep up to date on new developments by following us on Twitter and retweeting important updates: twitter.com/fossasia

Join and support the FOSSASIA network at community events

Set up a booth or a table about FOSSASIA at Open Source community events! There are many events of the open source community all over the world. The core team of FOSSASIA is simply not able to attend all events. You can support the cause by making the project visible. Register as a member of the FOSSASIA community at events, set up an info point and showcase Free and Open Source projects. Check out for example FOSSASIA event calendar calendar.fossasia.org or our meetup group in Singapore: meetup.com/FOSSASIA-Singapore-Open-Technology-Meetup

Translate our projects and their documentation

Do you speak more than one language? Most Open Tech projects are 100% volunteer translated, which means you can be part of a translation team translating software and documentation thousands of people will use. Start now and check out our GitHub repository.

Continue Reading How to join the FOSSASIA Community
My Tweets