The Open Event Server provides backend support to Open Event Organizer Android App which is used to check-in attendees in an event. When checking in attendees, it is important for any event organizer to keep track of the device that was used to check someone in. For this, we provide an option in the Organizer App settings to set the device name. But this device name should have support in the server as well.

The problem is to be able to add device name data corresponding to each check-in time. Currently attendees model has an attribute called `checkin-times`, which is a csv of time strings. For each value in the csv, there has to be a corresponding device name value. This could be achieved by providing a similar csv key-value pair for “device-name-checkin”.

The constraints that we need to check for while handling device names are as follows:

The case is a little different for a PATCH request since we need to check for the number of items differently like this:

Since we expect only the latest value to be present in a PATCH request, we first add it to the object by formatting using:

and then compare the length of the obtained CSVs for check in times and device names, so that corresponding to each check in time, we have either a device name or the default fill in value ‘-’. 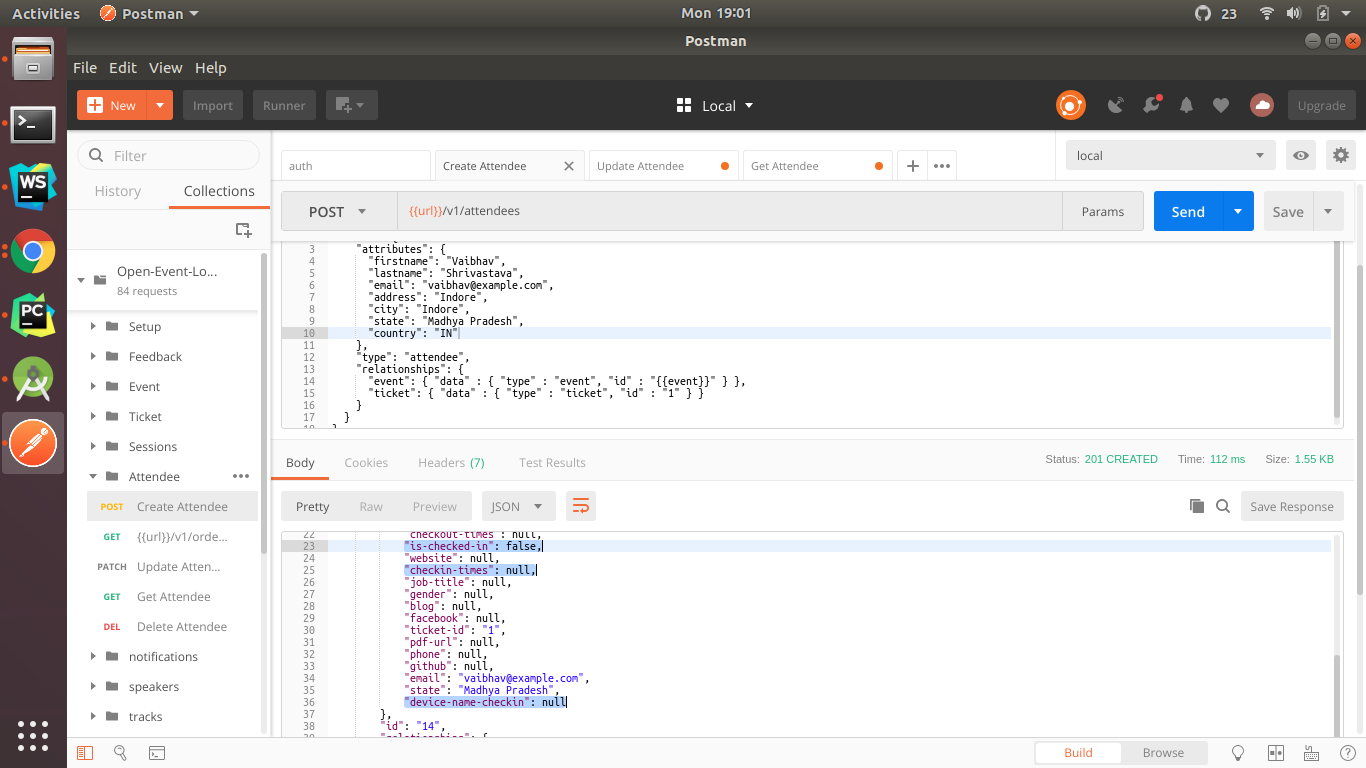 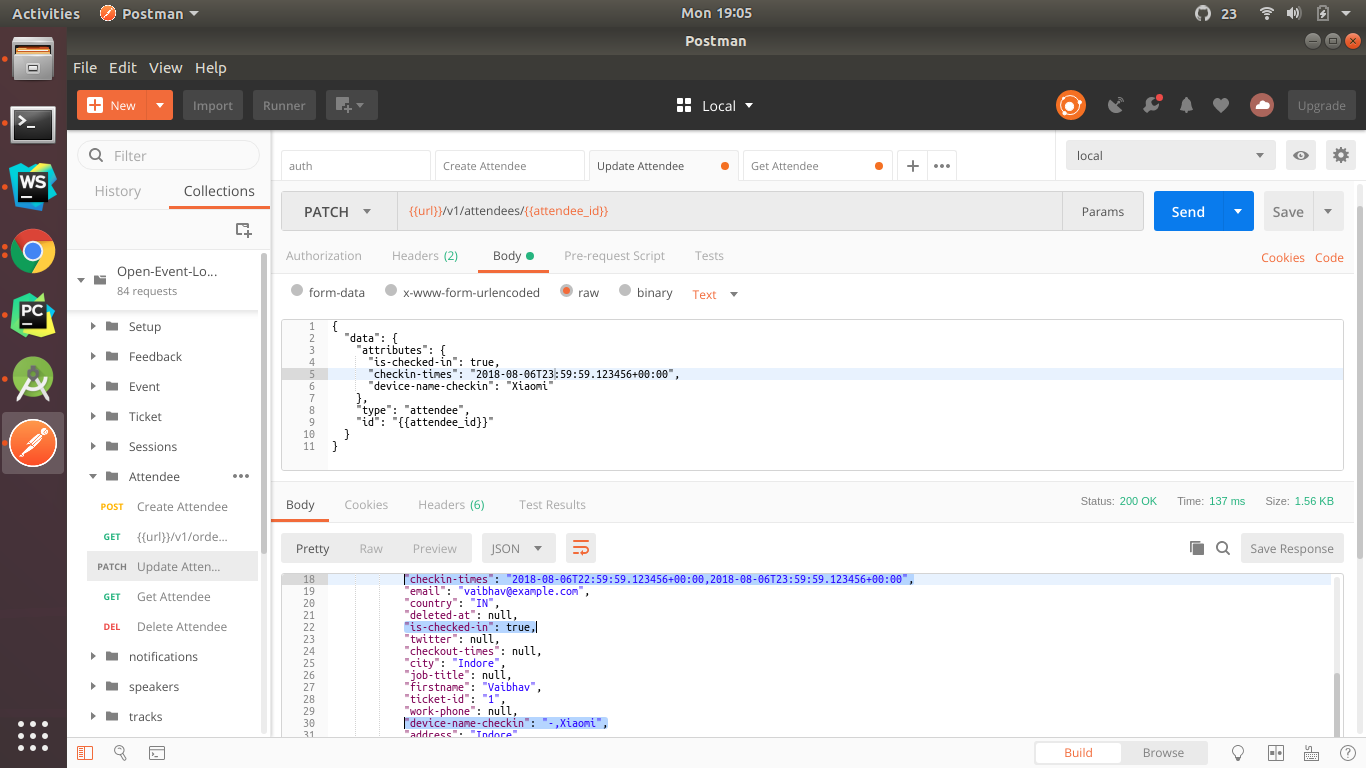 As of this writing, Open Event Server did not have the functionality to add, manipulate and delete checkout times of attendees. Event organizers should have access to log and update attendee checkout times. So it was decided to implement this functionality in the server. This boiled down to having an additional attribute checkout_times in the ticket holder model of the server.

So the first step was to add a string column named checkout_times in the ticket holder database model, since this was going to be a place for comma-separated values (CSV) of attendee checkout times. An additional boolean attribute named is_checked_out was also added to convey whether an attendee has checked out or not. After the addition of these attributes in the model, we saved the file and performed the required database migration:

To create the migration file for the above changes:

To upgrade the database instance:

Once the migration was done, the API schema file was modified accordingly:

After the schema change, the attendees API file had to have code to incorporate these new fields. The way it works is that when we receive an update request on the server, we add the current time in the checkout times CSV to indicate a checkout time, so the checkout times field is essentially read-only:

This completes the implementation of checkout times, so now organizers can process attendee checkouts on the server with ease.

In the ticket model file:

Also, in the __init__ constructor:

After that, we added a discount_code_id field in the ticket schema file:

In this file, we also removed the redundant tickets field.

Now, we migrated the Open Event Server database via the following commands:

For this, we, of course, imported the TicketSchemaPublic in this file first. After that, we created a DiscountCodeTicketRelationship class in the discount codes API file:

The next step was to add the query code to fetch the tickets related to a particular discount code from the database. For this, we added the following snippet to the query() method of the TicketList class in the tickets API file:

The only thing that remains now is adding the API routes for this relationship. We do that in the project’s __init__.py file:

Many routes already map to TicketList, we added one for that comes from discount codes API. Now we can use Postman to check this relationship, and it indeed works as expected, as seen below!

Badgeyay is an open-source utility developed by FOSSASIA to generate badges for conferences and events. The project is separated into two components to ease maintainability. First is the frontend part which is in ember and second part is backend which is in Flask. The choice of database to support backend is PostgreSQL.

Now comes the problem, whenever a user is registered in the database, he should receive  a verification mail, that he is successfully registered on the platform. For this case we have to listen to the database events on User model. This issue has greater extendibility than only sending greeting or verification mail to the user. We can extend this to trigger services that are dependent on user registration, like subscribing the user to some set of services based on the plan he opted while registration and many more.

These type of issues cannot be handled by normal relationship with tables and other entities, there has to be logic in place to support such functionalities. So the challenges for tackling the problem are as follows:

Similarly we can use separate logics according to the need of the application.

The Pull Request for the above functionality is at this Link

In Open Event Frontend, users can change the password for their account in the ‘Settings’ section. Changing one’s password will require the previous password of the same account which ensures the security. To implement change in password API, we created a REST endpoint here since the password cannot be included in the user model and thereby exposed to the client.

On submitting the form, we pass the action from the component to the controller.

Components consist of two parts: a template written in Handlebars, and a source file written in JavaScript that defines the component’s behavior.

Controllers behave like a specialized type of Component that is rendered by the router when entering a Route.

We could have handled this action in component itself. But, Ember JS’ main principle is DDAU i.e data down actions up. That is the main reason why we handle the action in out controller.

Thus, we handle the action in our controller as follows: