Let us see how we implemented this functionality into the frontend of the project.

We need to add a helper function for determining the font of the preview items. We define a function “rel”, as in relative, which defines the relative font size according to the chosen one.

Step 2 : Adding the styling in the scss file

Now we add the required styling in the SCSS file to ensure that the preview appears at the exactly as we desire it to be.

Step 3 : Now we need to add attributes to controller

Now we need to define the attributes that will control the text inside the preview and the preview controller.

Now we define when will the preview be changed. In our case it will be changed when a user types in something or a new image is selected.

The state of variables inside the preview section changes whenever the user types in a new name or designation etc. The image gets populated once the image is added either using the custom image input or by selecting the default image. 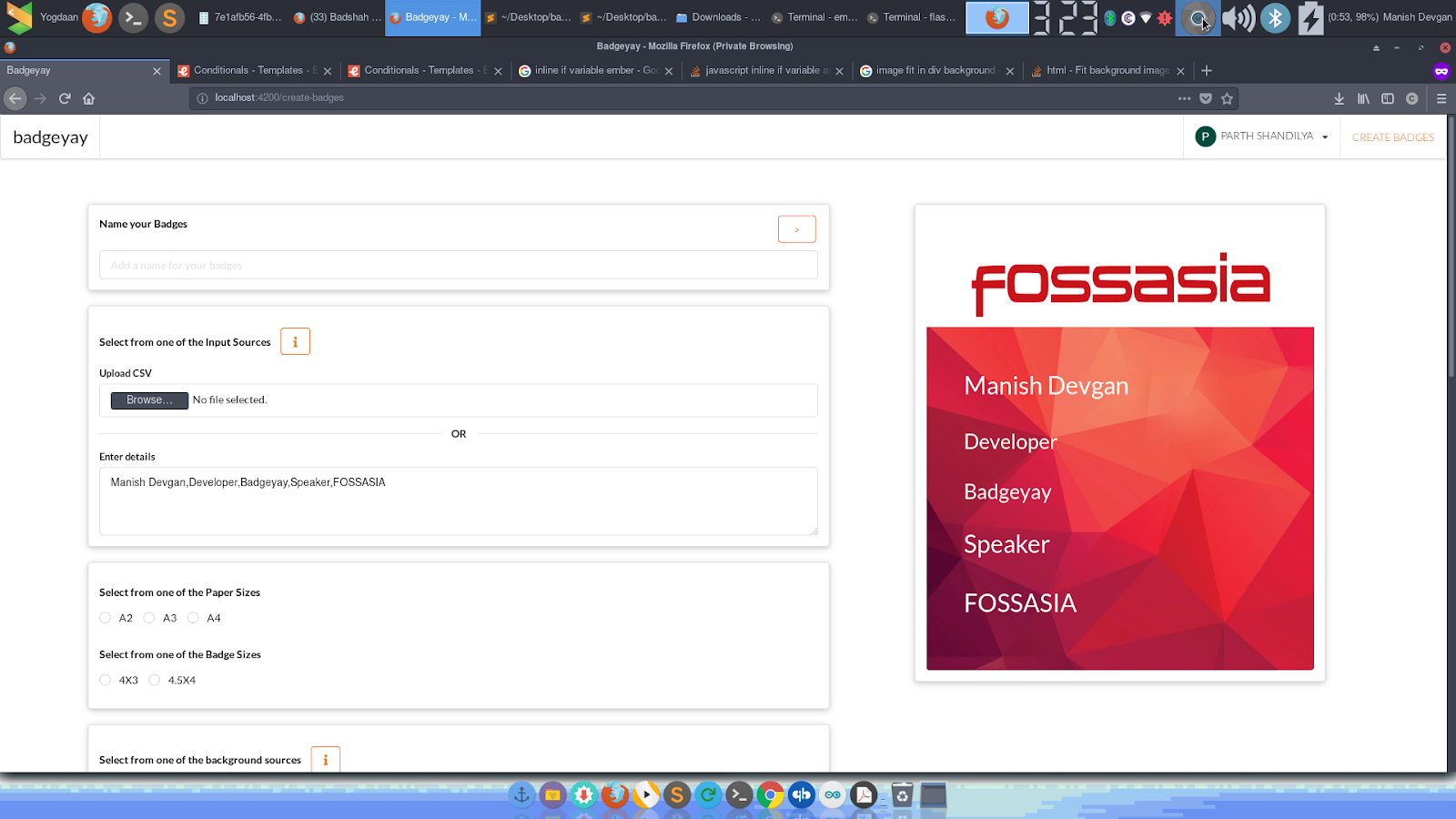 A Badge generator like Badgeyay must be able to generate, store and export the user data as and when needed. This blog post covers the addition of a preview section in the badge generator. It is discussed as to how the feature of toggling the preview section was implemented in the project

Let us see how we implemented this functionality into the frontend of the project.

Step 1 : Adding the toggle button to the frontend UI

Step 2 : Adding the styling in the scss file

Now we add the required styling in the SCSS file to ensure that the preview button appears at the exact desired position only.

Now we need to define the states that will control the text inside the preview button and the preview controller.

Now we add the method to control the toggle feature in the component.

The ‘togglePreview’ function changes the state of the preview, either rendering it on screen or off the screen. This is how we control the preview section being displayed on the screen. 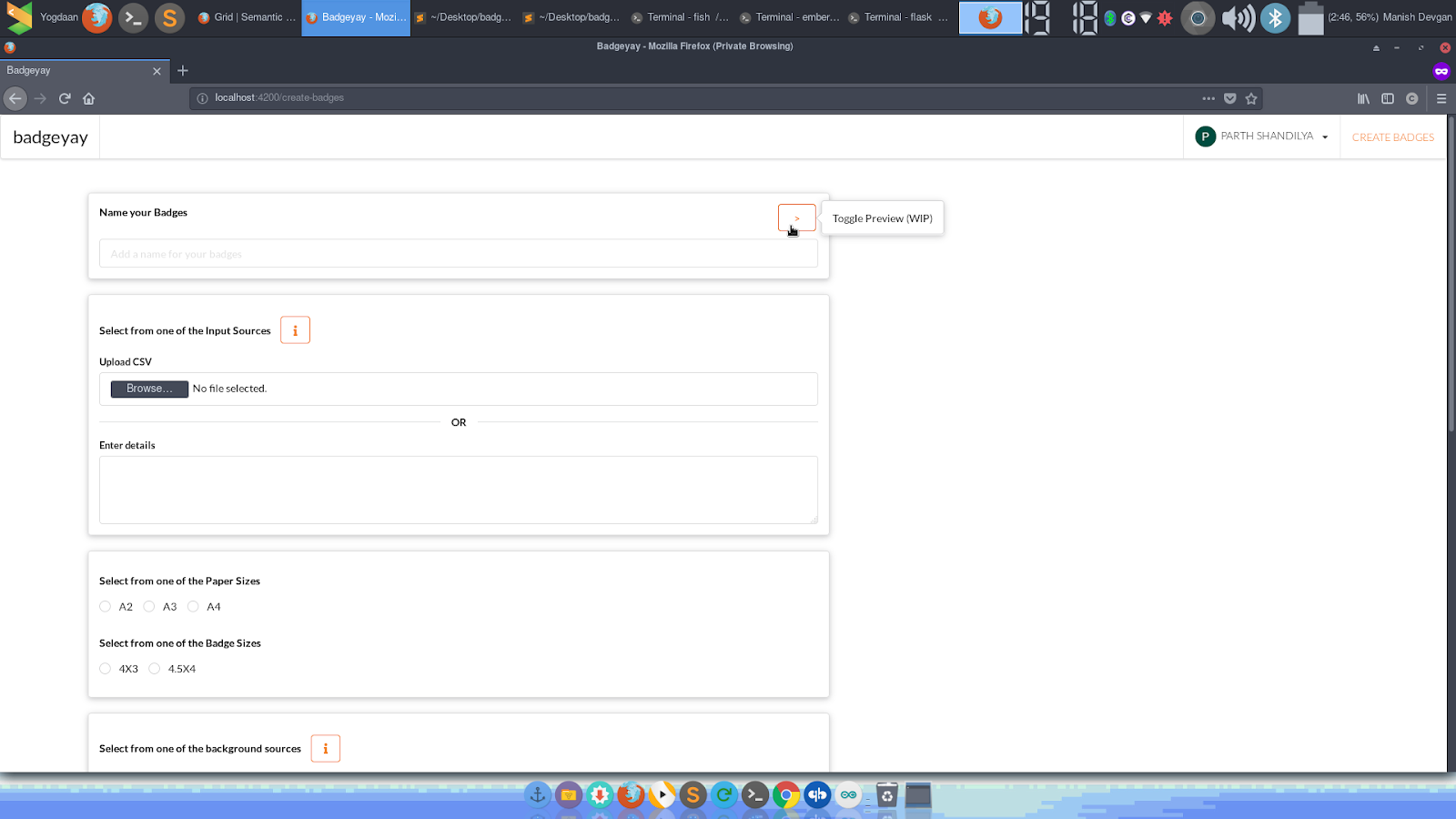 In an issue it was requested to add a Preview support for BadgeYay, i.e. Badges could be seen before they were generated.

It is a nice question. But Preview support was needed in a badge generator like BadgeYay.

This can be easily answered by an example. Let us suppose that I want to generate hundreds-thousands of badges for a meetup/event that I have organized. But I am confused as to what will look the best on and as badges. So I can just try them all in the Preview section and then choose the one that I like and generate it.

How to add Preview Support?

Adding Preview Support was not an easy task. Although coding it was not the hard part, but thinking of a way that uses less of the server’s support was a thing to take care of.

I had two options to choose from.

This was the idea that first came to my mind when i thought of implementing something like preview section.

It included of generating badges everytime the user wanted a preview and then using the same SVGs generated to show as the preview of badges.

Using Backend to generate badges for every instance would result to a lot of load to the server prior to the actual badge generation. And making it faster and creating less load on server was the main problem to tackle. So I came up with another idea of using frontend to generate Preview(s).

This method of generating preview is far more faster and less load heaving to the server.

It uses technologies such as HTML, CSS and Javascript to  generate preview for badges.

The Pull Request for the same is : here

The above snippet of code adds the image to the background of the preview div and stretches it to occupy full space.

The above snippet of code adds the input from the textArea to the appropriate place on the preview badge.

In Yaydoc, we save the preview of the documentation in our local server and then we show the preview using express’s static serve method. But the problem is that Heroku doesn’t support persistent server, so our preview link gets expired within a few minutes. In order to solve the problem I planned to deploy the preview to surge so that the preview doesn’t get expired. For that I made a shell script which will deploy preview to the surge and then I’ll invoke the shell script using child_process.

In the above snippet, I’m initializing the SURGE_LOGIN and SURGE_TOKEN environmental value, so that surge will deploy to the preview without asking any credentials while I am deploying the project. Then I’m executing surge by specifying the preview path and preview domain name.

Whenever the user generates documentation, I’ll invoke the shell script using child_process and then if it exits with exit code 0 I’ll pass the preview url via sockets to frontend and then the user can access the url.