Eventyay Attendee Android app contains a lot of shared components between classes that should be reused. Dependency Injection with Koin really comes in as a great problem solver.

Dependency Injection is a common design pattern used in various projects, especially with Android Development. In short, dependency injection helps to create/provide instances to the dependent class, and share it among other classes.

Let’s get into the details

Before Koin, dependency injection in Android Development was mainly used with other support libraries like Dagger or Guice. Koin is a lightweight alternative that was developed for Kotlin developers. Here are some of the major things that Koin can do for your project:

SETTING UP KOIN IN THE ANDROID APPLICATION

Adding the dependencies to build.gradle

Create a folder to manage all the dependent classes.

Inside this Modules class, we define modules and create “dependency” class instances/singletons that can be reused or injected. For Eventyay Attendee, we define 5 modules: commonModule, apiModule, viewModelModule, networkModule, databaseModule. This saves a lot of time as we can make changes like adding/removing/editing the dependency in one place.

Let’s take a look at what is inside some of the modules:

With all the modules created, it is really simple to get Koin running in the project with the function startKoin() and a few lines of code. We use it inside the application class:

Injecting created instances defined in the modules can be used in two way, directly inside a constructor or injecting into Android classes.

For testing, it is also really easy with support library from Koin.

Koin is really easy to use and integrate into Kotlin Android project. Apart from some of the basic functionalities mention above, Koin also supports other helpful features like Scoping or Logging with well-written documentation and examples. Even though it is only developed a short time ago, Koin has proved to be a great use in the Android community. So the more complicated your project is, the more likely it is that dependency injection with Koin will be a good idea.

New contributors to this project are sometimes not experienced with the set of libraries and MVP pattern which this app uses. This blog post is an attempt to walk a new contributor through some parts of the code of the app by implementing an operation for an endpoint of the API. We’ll be implementing the sponsor endpoint.

Open Event Organizer Android app uses a robust architecture. It is presently using the MVP (Model-View-Presenter) architecture. Therefore, this blog post aims at giving some brief insights to the app architecture through the implementation Sponsor endpoint. This blog post will focus only on one operation of the endpoint – the list operation – so as to make the post short enough. 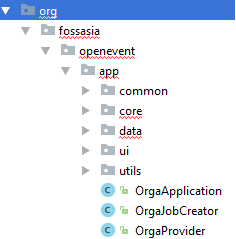 These are the parts of the project structure where major updates will be made for the implementation of Sponsor endpoint:

Setting up elements in the data module for the respective endpoint

All the annotations processor help us reduce boilerplate code.

From the Lombok plugin, we are using:

@Data is a shortcut annotation that bundles the features of @Getter, @Setter, @ToString and @EqualsAndHashCode

The @Delegate is used for direct calls to the methods that are annotated with it, to the specified delegate. It basically separates the model class from other methods which do not pertain to data.

@JsonNaming – used to choose the naming strategies for properties in serialization, overriding the default. For eg:  KEBAB_CASE, LOWER_CASE, SNAKE_CASE, UPPER_CAMEL_CASE

@JsonProperty – used to store the variable from JSON schema as the given variable name. So, “type” from JSON will be stored as sponsorType.

DbFlow uses model classes which must be annotated using the annotations provided by the library. The basic annotations are – @Table, @PrimaryKey, @Column, @ForeignKey etc.

These will create a table named attendee with the columns and the relationships annotated.

The above are required only for method declarations of the classes and interfaces that Sponsor.java extends or implements. These basically separate the required method overrides from the base item class.

A Repository mediates between the domain and data mapping layers, acting like an in-memory domain object collection. Client objects construct query specifications declaratively and submit them to Repository for satisfaction. Objects can be added to and removed from the Repository, as they can from a simple collection of objects, and the mapping code encapsulated by the Repository will carry out the appropriate operations behind the scenes.

To understand Observable, one will need to dive in RxJava. This video of a presentation by Jake Wharton can be a great start.

So, basically Observables represent sources of data, and whenever there is a change in our observable, i.e. our data, it fires an event and we get to know about it only if we have subscribed to it.

Setting up elements in core module (views and presenters)

Presently the app uses MVP architecture and the core package contains respective Views and Presenters for different properties of an event.

This is a simple Fragment that extends BaseFragment (a generic fragment class predefined in the project) and implements SponsorView interface.

A simple adapter for a RecyclerView.

In this Presenter we have used the @Inject annotation and some RxJava code:

The @Inject annotation is used to request dependencies. It can be used on a constructor, a field, or a method. If you annotate a constructor with @Inject, Dagger 2 can also use an instance of this object to fulfill dependencies. Note that we are not instantiating any object here ourselves.

Some RxJava part, which is not in the scope of this blog.

We are using Dagger for Dependency Injection, and therefore we need to update the modules that provide endpoint specific objects.

This video and this blog are a great start to learn about dependency injection using dagger.

Dependency injection is a technique whereby one object supplies the dependencies of another object. A dependency is an object that can be used (a service). An injection is the passing of a dependency to a dependent object (a client) that would use it. The service is made part of the client’s state. Passing the service to the client, rather than allowing a client to build or find the service, is the fundamental requirement of the pattern.(source)

Dependency Injection in built upon the concept of Inversion of Control. Which says that a class should get its dependencies from outside. In simple words, no class should instantiate another class but should get the instances from a configuration class.

Dagger 2 analyzes the dependencies for you and generates code to help wire them together.  It relies purely on using Java annotation processors and compile-time checks to analyze and verify dependencies. It is considered to be one of the most efficient dependency injection frameworks built to date.

@Singleton annotation signals to the Dagger compiler that the instance should be created only once in the application.

@Binds annotation is a replacement for @Provides methods that simply returns an injected parameter. Its generated implementation is likely to be more efficient. A method annotated with @Binds must be: abstract.

Also remember to make this change to FragmentNavigator.java

XML resources to be added: 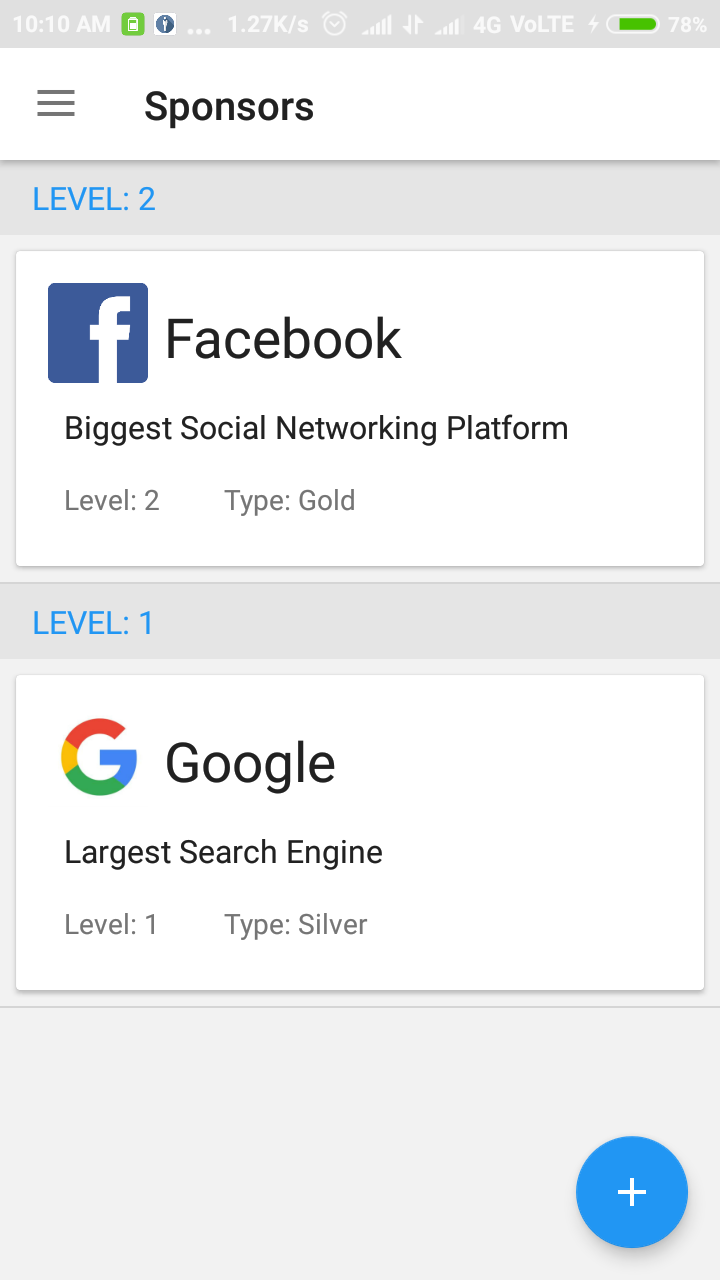 MVP stands for Model-View-Presenter, one of the most popular and commonly used design pattern in android apps. Where “Model” refers to data source, it can be a SharedPreference, Database or data from a Network call. Going by the word, “View” is the user interface and finally “Presenter”, it’s a mediator between model and view. Whatever events occur in a view are passed to presenter and the presenter fetches the data from the model and finally passes it back to the view, where the data is populated in ViewGroups. Now, the main question, why it is so widely used? One of the obvious reason is the simplicity to implement it and it completely separates the business logic, so, easy to write unit-tests. Though it is easy to implement, its implementation requires a lot of boilerplate code, which is one of its downpoints. But, using Dagger2 the boilerplate code can be reduced to a great extent. Let’s see how Dagger2 is used in Loklak Wok Android to implement MVP architecture.

Adding Dagger2 to the project

First a contract is created which defines the behaviour or say the functionality of View and Presenter. Like showing a progress bar when data is being fetched, or the view when the network request is successful or it failed. The contract should be easy to read and going by the names of the method one should be able to know the functionality of methods. For tweet search suggestions, the contract is defined in SuggestContract interface.

ApplicationModule provides the required dependencies for accessing the “Model” i.e. a Loklak API client and realm database instance. When we want Dagger2 to provide a dependency we create a method annotated with @Provides as providesLoklakAPI and providesRealm.

If we look closely providesLoklakAPI method requires a Retrofit instance i.e. a to create an instance of LoklakAPI the required dependency is Retrofit, which is fulfilled by providesRetrofit method. Always remember that whenever a dependency is required, it should not be instantiated at the required place, rather it should be injected by Dagger2.

As the ApplicationModule class provides these dependencies the class is annotated with @Module.

@Inject can be used on the fields also. When @Inject is used with a constructor the class also becomes a dependency provider, this way creating a method with @Provides is not required in a Module class.

Now, it’s time to connect the dependency providers and dependency requesters. This is done by creating a Component interface, here ApplicationComponent. The component interface defines where are the dependencies required. This is only for those cases where dependencies are injected by using @Inject for the member variables. So, we define a method inject with a single parameter of type SuggestFragment, as the Presenter needs to be injected in SuggestFragment.

The component interface is instantiated in onCreate method of LoklakWokApplication class, so that it is accessible all over the project.

Finally, in the onCreateView callback of SuggestFragment we call inject method of DaggerApplicationComponent to tell Dagger2 that SuggestFragment is requesting dependencies.