A Badge generator like Badgeyay must be able to generate, store and export the user data as and when needed. This blog post covers the addition of ember-progress-bar in the badgeyay project. This progress bar shows real-time progress of the badge generation process.

Let us see how we implemented this functionality into the backend of the project.

Step 1 : Adding the package to package.json

Image link is the link to the user’s uploaded image on remote firebase server.

Step 2 : Adding the progressbar to the frontend

Once we have installed the progress bar, we need to display it onto the frontend of the project.

To do that we use the handlebars templating engine to render the progress bar.

We need to define the states that the progress bar will take up in realtime. And to do so, we make changes to the create-badges controller

Now we manage the states according to the functionality that has been done.

Finally, we have our basic progress bar ready for the users to view. 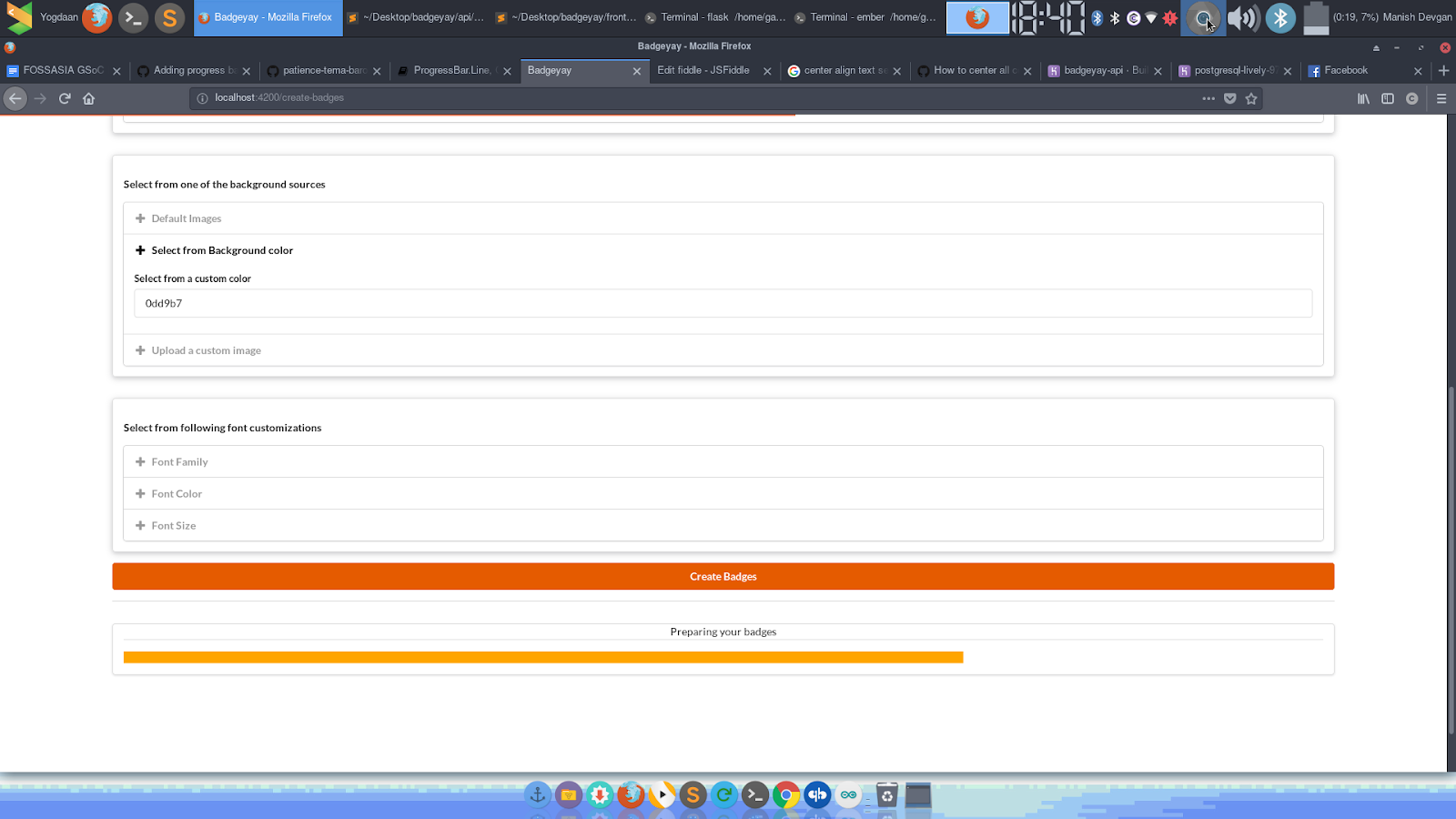 Badgeyay is a badge generator and its main functionality is generating badges. Since the beginning of GSoC 2018 period, Badgeyay is under refactoring and remodeling process. We have introduced many APIs to make sure that Badgeyay works. Now, the badge generator has an endpoint to generate badges for your events/meetups

How to create badges?

Creating badges using the newly formed API is simpler than before. All you need to do is pass some basic details of the image you want, the data you want, the size and the color of font etc to the API and woosh! Within a blink of your eye the badges are generated.

“csv” is the filename of the csv that the user uploads and get back as a result, “image” is the image name that user gets after a successful upload to the respective APIs, “text-color” is the color of the text that the user wants on the badges.

Output of the API

What is happening behind the scene?

Once the user sends the data to the API, the required route is triggered and the data is checked,If the data is not present an error response is sent back to the user so as to inform them about the misplacement or improper format of data.

After the data is received, we send it to MergeBadges which internally calls the GenerateBadges class which creates the badges.

And this is how we generated badges for the user using the Badgeyay Backend API.

How is this effective?

We are making sure that the user chooses the image and csv that he/she has uploaded only,

In this way we maintain a proper workflow, we also manage these badges into the database and hence using the filenames helps a lot.It does not involve sending huge files and a lot of data like we had in the previous API.

Earlier, we used to send the image and the csv altogether that caused a serious mismanagement of the project. In this case we are accepting the CSVs and the Images on different API routes and then using the specific image and csv to make badges. We can now more easily relate to the files associated with each and every badge and henceforth we can easily manage them in the database.

We will work on adding security to the route so that not anyone can create badges. We also need to integrate database into badges generated service so that we can maintain the badges that the user has generated.