Last week grand prize winners from FOSSASIA and other organizations that participated in Google Code-In 2014 attended a trip to the US accompanied by a guardian and a mentor. The grand prize trip is the crowning activity of Google Code In, the program organized by Google with the aim of introducing pre-university students to open source. I was fortunate enough to take part as the mentor representing FOSSASIA.

2014 was FOSSASIA’s first participation in GCI and it was a great success for us.

The trip kicked off on the evening of the 7th June with a ‘meet and greet’ at the hotel lobby. Stephanie Taylor and Mary Radomile from Google OSPO welcomed us. I met Namanyay Goel and Samarjeet Singh, the two winners from fossasia, and a bunch of other winning students and mentors. Groups of students were quick to engage in lively discussions, It was hard to believe that most of them met for the first time. I was glad to learn that both our winning students enjoyed the contest as much as I did. At the end of the two hours both students and mentors were holding on to some rewards from Google. As I was tired from the long flight I bid everyone an early goodbye to get a much needed sleep. 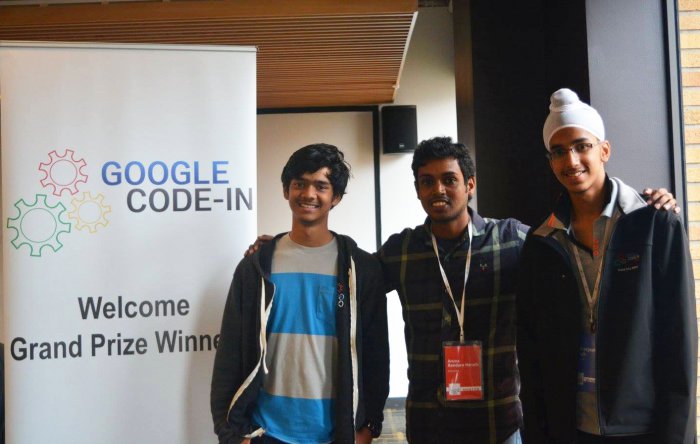 I met Namanyay and Samarjeet, Grand prize winners from FOSSASIA.

The next morning we met in the hotel lobby again. We were to spend the day in the Google headquarters in Mountain View. The San Francisco traffic delayed our buses a bit but we arrived at the Googleplex to a pleasant breakfast. In the morning we listened to talks from Engineers of Google projects Ara and Tango. A series of interesting questions from an enthusiastic audience followed each talk. Chris DiBona, the director of the Google OSPO presented winners their awards. After a lunch where students got to enjoy with Googlers from their respective countries, we were back for more talks. The one from Google’s rapidly evolving self driving cars, caught a lot of attention. We also got to visit the Google visitor center, where we met famous giant Androids, and to the Google store, where everyone bought a bunch of souvenirs to take back home.

Third day of the tour was the ‘fun day’. Each of us were to choose between visiting the Alcatraz island which was the home to the historic federal prison, the Exploratorium, a science and arts museum and a segway tour around San Francisco. About half of the group and I picked segways. We rode the brilliantly engineered machines around the city while our guide entertained us with interesting facts about the city. It was a novel experience for everyone. The three groups met for the lunch and set off to see the famous Golden gate bridge, where we spent the afternoon. A Yacht course across the San Francisco bay, during which we sailed under the Golden Gate, completed a day filled with amazing memories.

The final day was spent in the Google office in San Francisco. We got to listen to a talk about YouTube, which again followed some interesting questions and answers. Carol Smith introduced GSOC, the Sister program of GCI, to the students. Each of the mentors gave a brief introduction to their organizations. We were officially announced that GCI will continue in 2015 as well. The students presented Stephanie with a handmade thank you card inscripted by all of them, which I thought was pretty cool.

The trip was filled with both information and fun. It indeed was a Grand Prize. I hardly know how to thank Stephanie and co. for everything.

I hope, irrespective of being probably the best in their age, in their field, the winning students would stay humble and hungry for new knowledge. Looking forward to GCI 2015.